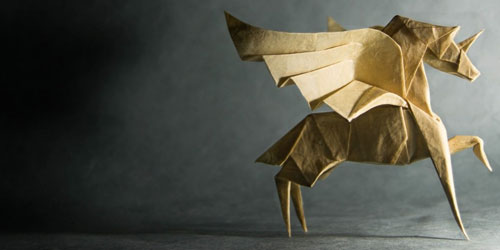 Origami (折り紙) is the art of paper folding, which is often associated with Japanese culture. In modern usage, the word “origami” is used as an inclusive term for all folding practices, regardless of their culture of origin.

Origami (折り紙) is the art of paper folding, which is often associated with Japanese culture. In modern usage, the word “origami” is used as an inclusive term for all folding practices, regardless of their culture of origin. The goal is to transform a flat square sheet of paper into a finished sculpture through folding and sculpting techniques. Modern origami practitioners generally discourage the use of cuts, glue, or markings on the paper. Origami folders often use the Japanese word kirigami to refer to designs which use cuts.

The small number of basic origami folds can be combined in a variety of ways to make intricate designs. The best-known origami model is the Japanese paper crane. In general, these designs begin with a square sheet of paper whose sides may be of different colors, prints, or patterns. Traditional Japanese origami, which has been practiced since the Edo period (1603–1867), has often been less strict about these conventions, sometimes cutting the paper or using nonsquare shapes to start with. The principles of origami are also used in stents, packaging, and other engineering applications. 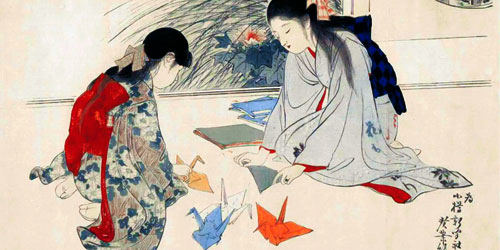 Distinct paper folding traditions arose in Europe, China, and Japan which have been well-documented by historians. These seem to have been mostly separate traditions, until the 20th century.

In China, traditional funerals often include the burning of folded paper, most often representations of gold nuggets (yuanbao). The practice of burning paper representations instead of full-scale wood or clay replicas dates from the Song Dynasty (905–1125 CE), though it is not clear how much folding was involved.

In Japan, the earliest unambiguous reference to a paper model is in a short poem by Ihara Saikaku in 1680 which mentions a traditional butterfly design used during Shinto weddings. Folding filled some ceremonial functions in Edo period Japanese culture; noshi were attached to gifts, much like greeting cards are used today. This developed into a form of entertainment; the first two instructional books published in Japan are clearly recreational.

In Europe, there was a well-developed genre of napkin folding, which flourished during the 17th and 18th centuries. After this period, this genre declined and was mostly forgotten; historian Joan Sallas attributes this to the introduction of porcelain, which replaced complex napkin folds as a dinner-table status symbol among nobility. However, some of the techniques and bases associated with this tradition continued to be a part of European culture; folding was a significant part of Friedrich Froebel’s “Kindergarten” method, and the designs published in connection with his curriculum are stylistically similar to the napkin fold repertoire. Another example of early origami in Europe is the “parajita,” a stylized bird whose origins date from at least the nineteenth century.

When Japan opened its borders in the 1860s, as part of a modernization strategy, they imported Froebel’s Kindergarten system—and with it, German ideas about paperfolding. This included the ban on cuts, and the starting shape of a bicolored square. These ideas, and some of the European folding repertoire, were integrated into the Japanese tradition. Before this, traditional Japanese sources use a variety of starting shapes, often had cuts; and if they had color or markings, these were added after the model was folded.

In the early 1900s, Akira Yoshizawa, Kosho Uchiyama, and others began creating and recording original origami works. Akira Yoshizawa in particular was responsible for a number of innovations, such as wet-folding and the Yoshizawa–Randlett diagramming system, and his work inspired a renaissance of the art form.During the 1980s a number of folders started systematically studying the mathematical properties of folded forms, which led to a rapid increase in the complexity of origami models.

In addition to the more common still-life origami, there are also moving object designs; origami can move in clever ways. Action origami includes origami that flies, requires inflation to complete, or, when complete, uses the kinetic energy of a person’s hands, applied at a certain region on the model, to move another flap or limb. Some argue that, strictly speaking, only the latter is really “recognized” as action origami. Action origami, first appearing with the traditional Japanese flapping bird, is quite common. One example is Robert Lang’s instrumentalists; when the figures’ heads are pulled away from their bodies, their hands will move, resembling the playing of music.

A stellated icosahedron made from custom papers

Modular origami consists of putting a number of identical pieces together to form a complete model. Often the individual pieces are simple, but the final assembly may be more difficult. Many modular origami models are decorative folding balls such as kusudama, which differ from classical origami in that the pieces may be held together using thread or glue.

Chinese paper folding, a cousin of origami, includes a similar style called golden venture folding where large numbers of pieces are put together to create elaborate models. This style is most commonly known as “3D origami”. However, that name did not appear until Joie Staff published a series of books titled 3D Origami, More 3D Origami, and More and More 3D Origami. This style originated from some Chinese refugees while they were detained in America and is also called Golden Venture folding from the ship they came on.

Wet-folding is an origami technique for producing models with gentle curves rather than geometric straight folds and flat surfaces. The paper is dampened so it can be moulded easily, the final model keeps its shape when it dries. It can be used, for instance, to produce very natural looking animal models. Size, an adhesive that is crisp and hard when dry, but dissolves in water when wet and becoming soft and flexible, is often applied to the paper either at the pulp stage while the paper is being formed, or on the surface of a ready sheet of paper. The latter method is called external sizing and most commonly uses Methylcellulose, or MC, paste, or various plant starches.

Pureland origami adds the restrictions that only simple mountain/valley folds may be used, and all folds must have straightforward locations. It was developed by John Smith in the 1970s to help inexperienced folders or those with limited motor skills. Some designers also like the challenge of creating within the very strict constraints.

Origami tessellation is a branch that has grown in popularity after 2000. A tessellation is a collection of figures filling a plane with no gaps or overlaps. In origami tessellations, pleats are used to connect molecules such as twist folds together in a repeating fashion. During the 1960s, Shuzo Fujimoto was the first to explore twist fold tessellations in any systematic way, coming up with dozens of patterns and establishing the genre in the origami mainstream. Around the same time period, Ron Resch patented some tessellation patterns as part of his explorations into kinetic sculpture and developable surfaces, although his work was not known by the origami community until the 1980s. Chris Palmer is an artist who has extensively explored tessellations after seeing the Zilij patterns in the Alhambra, and has found ways to create detailed origami tessellations out of silk. Robert Lang and Alex Bateman are two designers who use computer programs to create origami tessellations. The first international convention devoted to origami tessellations was hosted in Brasília (Brazil) in 2006, and the first instruction book on tessellation folding patterns was published by Eric Gjerde in 2008. Since then, the field has grown very quickly. Tessellation artists include Polly Verity (Scotland); Joel Cooper, Christine Edison, Ray Schamp and Goran Konjevod from the USA; Roberto Gretter (Italy); Christiane Bettens (Switzerland); Carlos Natan López (Mexico); and Jorge C. Lucero (Brazil).

Kirigami is a Japanese term for paper cutting. Cutting was often used in traditional Japanese origami, but modern innovations in technique have made the use of cuts unnecessary. Most origami designers no longer consider models with cuts to be origami, instead using the term Kirigami to describe them. This change in attitude occurred during the 1960s and 70s, so early origami books often use cuts, but for the most part they have disappeared from the modern origami repertoire; most modern books don’t even mention cutting.

Strip folding is a combination of paper folding and paper weaving. A common example of strip folding is called the Lucky Star, also called Chinese lucky star, dream star, wishing star, or simply origami star. Another common fold is the Moravian Star which is made by strip folding in 3-dimensional design to include 16 spikes.

Realistic: Creations that exhibit the main features of the subject, often resulting in complex designs with many steps.

Minimal: Creations that capture the essence of the subject with minimal folds and with an emphasis on simplicity.

Modular: Multiple geometric “units” made from multiple sheets of paper whose flaps and pockets tuck into each other to form polygons or polyhedra. Typically, all sheets are folded in the same way or in a small number of ways.

Composite: As with modular origami, multiple sheets of paper are used, but in this style each sheet is folded differently to realize a different part of the subject. Composite origami was one of the most common styles in the 1950s and ’60s but is relatively uncommon today.

Practical: Models that have a real-life application, such as for use as envelopes, boxes, cups, dishes, etc.

Pureland: A concept suggested by John Smith of England, who proposed a composition system using only square paper and “mountain” and “valley” folds, resulting in models that are easy to duplicate.

Wet folding: A technique invented by Akira Yoshizawa in which the paper contains a water-soluble glue (known as sizing) and is dampened slightly before folding. The dampness permits the paper to be folded into soft curves, which then harden in durability as the paper dries.

Crumpled: A technique created by Paul Jackson and developed by Vincent Floderer that involves the crumpling of the paper before folding. This technique can produce highly realistic organic forms.