The kamanche (Persian: کمانچه‎‎) or kamancheh is a bowed string instrument used in Persian, Azerbaijani, Armenian, and Kurdish music. The kamanche is related to the rebab which is the historical ancestor of the kamanche and the bowed Byzantine lyra. The strings are played with a variable-tension bow. The word “kamancheh” means “little bow” in Persian (kæman, bow, and -cheh, diminutive). In 2017, the art of crafting and playing with Kamantche was included into the UNESCO Intangible Cultural Heritage Lists of Azerbaijan and Iran.
The kamanche has a long neck including fingerboard which kamanche maker shapes it as a truncated inverse cone for easy bow moving in down section, pegbox in both side of which four pegs are placed, and finial Traditionally kamanches had three silk strings, but modern instruments have four metal strings. Kamanches may have highly ornate inlays and elaborately carved ivory tuning pegs. The body has a long upper neck and a lower bowl-shaped resonating chamber made from a gourd or wood, usually covered with a membrane made from the skin of a lamb, goat or sometimes a fish, on which the bridge is set. From the bottom protrudes a spike to support the kamanche while it is being played, hence in English, the instrument is sometimes called the spiked fiddle. It is played sitting down held like a cello though it is about the length of a viol. The end-pin can rest on the knee or thigh while the player is seated in a chair. 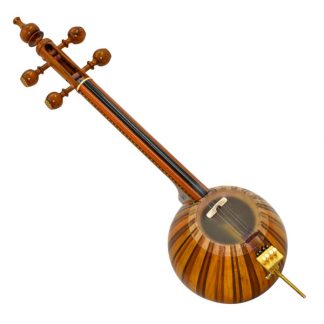